They banged in three goals, including one from Phil Foden, after he sang his hit The One and Only.

Chesney, 51, wants to play again when they meet Senegal in the last 16 on Sunday — then hopefully serenade them to the final.

He said: “The team wants me back.”

Chesney Hawkes revealed last night how he was mobbed by England stars after the 3-0 win over Wales — who told him his show turned the game.

The Three Lions were sluggish during a goalless first-half in Qatar before Chesney performed his 1991 hit The One and Only on the pitch during the interval. 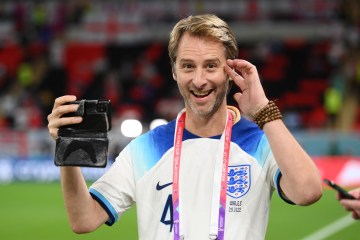 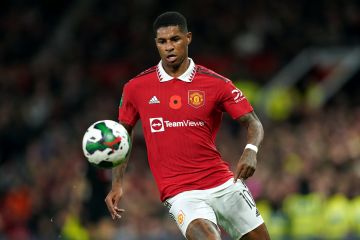 When they came back out, the Three Lions were a team transformed, with Marcus Rashford opening the scoring from a brilliant free-kick on 50 minutes.

Just over a minute later, Phil Foden swept in a second, with Rashford later banging into a third, sending the English fans — and football-mad Chesney — into dreamland.

Berkshire-born Chesney, 51 — who became a household name with his debut single — celebrated with his heroes after the game, and revealed they want to make him their One and Only mascot.

He told The Sun: “I spent five weeks at number one and topped the charts on both sides of the Atlantic – but this was undoubtedly my career highlight.

“I got to perform for the England team and the fans I love — then got to celebrate with the players after the game.

“I came here as a football fan above all else and this was the best night any fan could ever imagine.”

The dad of three now lives in Los Angeles with model wife Kristina, 47, and children Casey, 21, Jesse, 19, and 17-year-old Indiana.

But he remains a massive West Ham fan — and told how he got a hug from Hammers midfielder Declan Rice, plus a host of other stars including the two goalscorers.

He said: “I’m a Hammers nut through-and-through so made a beeline for my hero Declan who gave me a wonderful cuddle.

“Then I was mobbed by Jack Grealish, Phil Foden, Mason Mount, Luke Shaw and double goalscorer Marcus Rashford gave me a high five.

“And it was a weird but wonderful feeling when Jude Bellingham gave me a hand slap near the team tunnel — he’s two years younger than my eldest kid!

“Every one of them said they wanted to adopt me as their mascot after England’s fortunes changed so quickly after I performed.

“They joked that I had turned the game — and even asked me to perform at the team hotel.

“It was honestly one of the best moments of my entire life.”

Chesney, who never repeated his initial chart success, is desperate to return for England’s last-16 clash with Senegal on Sunday night.

But he must first convince Fifa bosses that he will not give the Three Lions an unfair advantage.

The one-song slot on Tuesday night was his first stadium gig since he supported Canadian ballad master Bryan Adams in 1993.

And Chesney was delighted with the reception he got from the Three Lions contingent at the Al Rayyan Stadium.

He said last night: “Nothing can match the feeling of performing in front of thousands of England supporters.

“I was nervous about how they’d react but the England fans clapped along during the bit where I stopped playing guitar and gave me a fantastic reception at the end. It was a dream night.

He said England stars capped it off by handing him signed shirts.

New pal Rice gave him the one off his back on which he wrote for Chesney’s football-mad youngest son: “Indi Top Boy! – Declan Rice.

Chesney also recorded a video of himself posing as a substitute and leaping off the bench in the dugout — and he told how he would love to help the team get to the finals.

The star is negotiating to book a slot during the last-16 game — and will even perform a sing-off with a Senegalese counterpart if necessary.

He said: “The team want me back, I think England want me back — and I just hope Fifa allow me to make it happen again. I’m England’s One and Only mascot.

“There’s been talk about favouritism if one team gets a fan to perform at half time and I’m happy to go head-to-head with a Senegalese singer during the break.

“I just want to come back and give the team the best boost I possibly can.”