Elon Musk, new owner, CEO and Dictator for Life of Twitter, has thrown the cat among the bluebirds by announcing charges for Twitter verfication – blue ticks.

As well as causing an entertaining exchange between Musk and Stephen King, the move became a main talking point on Twitter, in a crowded field of Matt Hancock’s I’m a Celebrity appearance and giant baubles rolling around London.

Those with clout will lose their clout if they appear to be paying for this vanity badge.

Those with no clot will buy and signal it and try to appear important.

End result : chaos. But maybe that’s what the end goal is.

Imagine being the loser who pays $8 a month for a blue tick though. lol.

Do you want to buy a blue tick? They’re 20 bucks, no wait… eight bucks. You gotta buy one, the ad revenue won’t pay the bills alone! pic.twitter.com/5ZidD9RWSB

I didn’t ask for, want or consent to being blue ticked. It just happened. Anyone who is going to pay $20 a month to keep that is an idiot. The tick isn’t even blue for a start. I’m not paying $20 for something blue that isn’t even blue.

Musk explained his thinking on the charge – and the extras accompanying it. 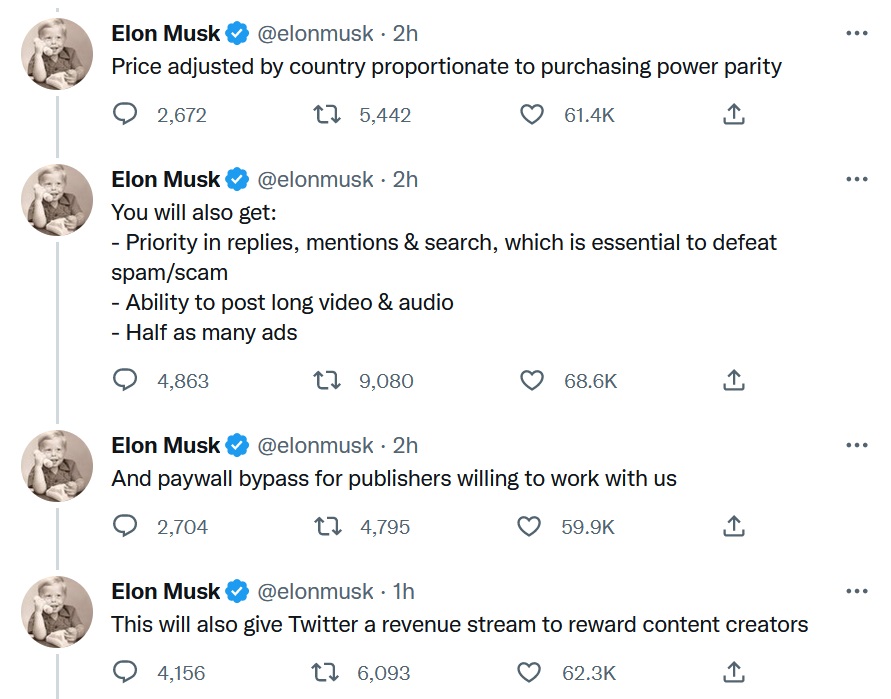 A lot of people pointed out the problem with the pay-as-you-glow system.

I think this is a fundamental misunderstanding of how verification is supposed to work. A blue check has been perceived as a status symbol for some time when really it’s just supposed to tell you if a page is authentic or not.

These responses say it all.

Lords and peasant system is bullshit power to the people [two tweets later] please pay to be prioritized over the peasants pic.twitter.com/M0JVvA8uwm

Could we get a Saffron tick by paying more?

It’s almost as if he bought Twitter without having any serious plan for after the purchase and is just making shit up as he goes.

That’s not power to the people—

That’s power to the rich, regardless of merit

… and regardless of need to be verified (ie stop confusion via impersonations).

just so I’m clear, he’s solving an imaginary ‘lords and peasants’ system by making it so only certain people can afford it. what a fucking dumbass

Firstly: does that mean anyone can buy a blue tick? Doesn’t that defeat the purpose of the blue tick?

2nd: it’s mad to me that Stephen King can say no to paying $20 and Elon Musk can just pluck a new price out of thin air.

Does that mean there’s literally no business model?

Even if I thought a blue tick and the added facilities were worth 8 quid, I wouldn’t give it to Elon Musk.

Isn’t the verification to prove it’s the person / band that they claim to be??? There are zero other benefits. If you care about ‘peasants’ there is maybe a better home for your billions.
Yours,
Lord @Tim_Burgess

Me to my blue tick pic.twitter.com/XQNhQuq24c

Billionaire preaching about Lords and peasants is quite the sight

$8 still seems high to me for these meaningless features. Brands might want the long video/audio thing but the other two are stupid. Indeed, there is a free way to see zero ads: tweetdeck

“I don’t agree with the lords and peasants system on Twitter, but I’m fine with sitting on hundreds of billions of dollars in real life while people starve.”

“Priorities in replies” is something only a celeb would think is important. Most tweets get like 2 replies tops, this only matters for like, come-to-brazil stan twitter and weirdos who reply to like, Joe Biden

Interesting call to make something that is “essential to defeat spam/scam” a premium product rather than something all users can expect.

“Down with the lords and peasants system!” – the richest man in the world asking you to pay him $96/year in the name of “free speech.” pic.twitter.com/wtoxMfOKOQ

The more money you spend, the more free speech you get.

9 of Elon Musk’s best – or worst – moments on Twitter

Want To Improve Your Energy Levels? Try These 7 Simple Nudges

Quinn Country RTE: ‘I have nothing good to say about Kevin Lunney,’ says…