T20 World Cup permutations: What does everyone need to progress to semi-finals?


The Super 12 stage of the Men’s T20 World Cup is set for a thrilling climax with all to play for as we enter the final round of matches.

The top two from each group will qualify for the semi-finals, with 10 of the 12 sides still mathematically in with a chance of reaching the last four.

With a number of teams likely to end level on points, net run-rate could decide who progresses and who is getting the next flight home.

But what are the permutations? And how do you calculate net run-rate?

BBC Sport has been crunching the numbers to find out… 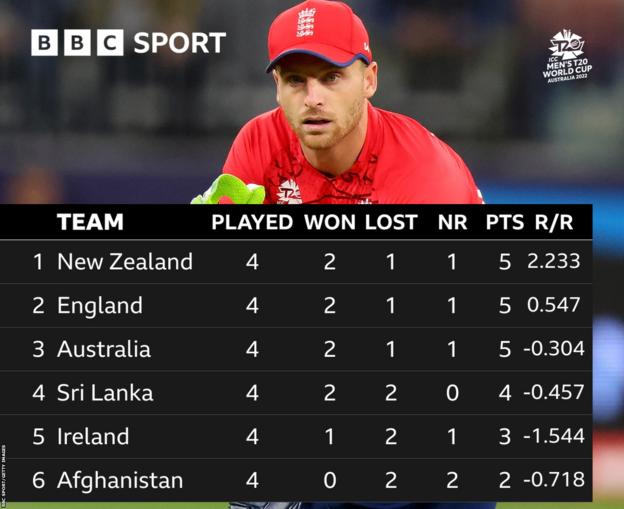 New Zealand are in a good position to progress to the last four because of their superior net run-rate. Victory over Ireland in their final game will more than likely guarantee their progress as a result, because England and Australia would both need large-margin victories for the Kiwis to drop out.

England went back into the top two with a 20-run win over New Zealand on Tuesday. A win over Sri Lanka would practically guarantee England’s progress because their net run-rate is significantly better than Australia’s at the moment. But it could come down to a three-way tussle between England, Australia and New Zealand. Jos Buttler’s side have the advantage of playing last in the group so they will know exactly what they need to qualify.

Australia moved into the top two with a 42-run win over Ireland on Monday, but were replaced by England on Tuesday. They need to beat Afghanistan in their final game and by a healthy margin. Even a victory in that game could see them eliminated because their net run-rate is currently inferior to New Zealand and England.

Sri Lanka need to beat England and hope that Afghanistan beat Australia in their final game to go through.

Ireland’s hopes of reaching the last four are all but over now. They need to beat New Zealand while massively improving their net-run rate and hope that Afghanistan beat Australia.

Afghanistan are no longer able to qualify after losing to Sri Lanka. 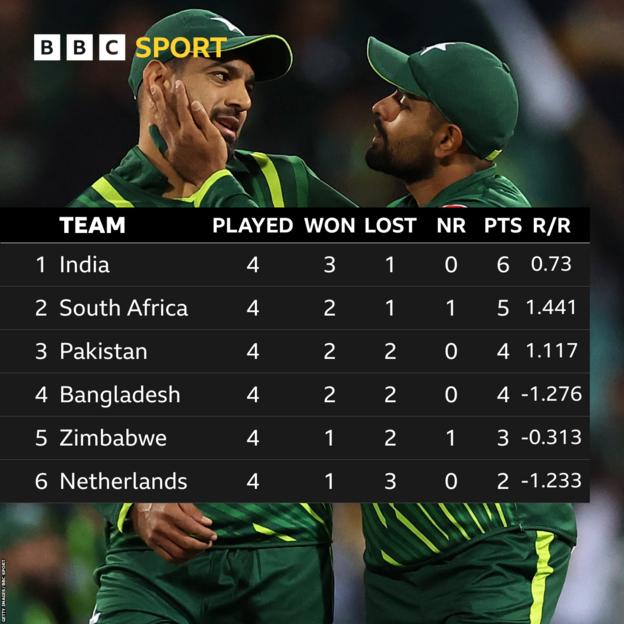 India will progress with a victory over Zimbabwe. They will also go through if the game is washed out as only South Africa can match a seven-point tally.

South Africa need to beat the Netherlands in their final game.

Bangladesh must beat Pakistan in their final game and hope India lose to Zimbabwe, though they could still miss out unless they improve their net run-rate.

Pakistan can also still progress but need to beat Bangladesh and hope that South Africa lose to the Netherlands, or the game is washed out.

Zimbabwe are all but out. They need the Netherlands to beat South Africa, Pakistan-Bangladesh to be washed out and to beat India. Even then they would also need to vastly improve their net run-rate.

Netherlands can no longer qualify.

How is net run-rate calculated?

Run-rate is the average number of runs scored per over by a team in their entire innings – so, for example, a score of 160 off 20 overs equals eight runs per over.

Net run-rate is calculated by subtracting the opposition’s run-rate from the other team’s run-rate.

If a team is bowled out inside their allotted overs, their run-rate is calculated by dividing the runs by the maximum overs they could have batted – 20 overs in the case of this tournament.

It’s unseasonably warm in Europe this fall. Climate researchers are feeling the warmth.