By Neirin Gray Desai For Dailymail.Com

Two police officers were injured in Newark, New Jersey, during a shootout with a gunman who was firing from a rooftop or window, officials said.

The shooter was using a rifle and firing directly at police at around 2pm on Tuesday as they were attempting to question him over potential links to a shooting last Friday, NBC New York reported.

Tuesday’s shooting reportedly took place near the intersection of Van Velsor Place and Chancellor Avenue in a residential neighborhood in Weequahic, Newark.

One officer was shot in the neck while another was shot in his leg, probably multiple times, a police source told DailyMail.com. Both officers were taken by nearby University Hospital and were in stable condition.

The suspect has still not been brought into custody.

It is not yet known whether the shots were fired from the roof of 103 Chancellor Avenue or from a window.

NBC New York reports that the suspect’s girlfriend may live on the block.

Law enforcement officials are still searching for the suspect in the general area.

Law enforcement officers from the FBI, ATF, and US Marshals all responded to the scene.

New Jersey Transit Police said on Twitter at around 3.30pm that people should stay clear of the area and that they are rerouting NJT buses to avoid it.

SWAT were on the scene assisting with a search for the suspect. Law enforcement officials have said that the situation is under control and the suspect is no longer a threat to the community.

That source told the local news outlet that the neighborhood was locked down and the suspect is believed to be confined to a building.

A high-ranking law enforcement source said that only two shots were fired from the suspect’s weapon, NBC New York said. 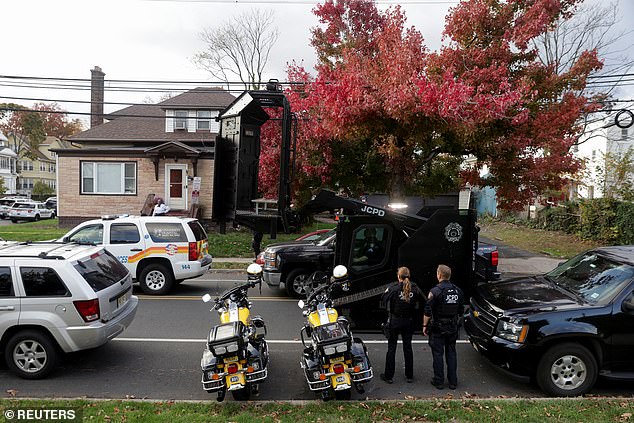 The condition of the two officers that were shot is not currently known. Both officers were hastened to University Medical Center in a police car 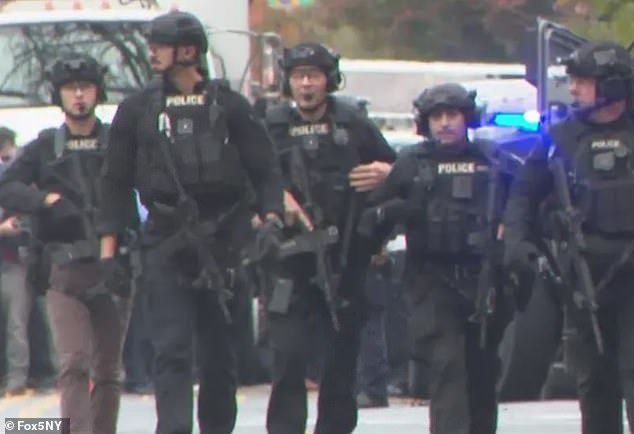 DEVELOPING: Reports that a shooter in an elevated position, has shot 2 police officers in Newark, New Jersey. Shooter is reportedly using a rifle and is actively shooting at PD.

The condition of the two officers shot is not currently known but both are expected to survive their injuries.

Newark Governor Phil Murphy said in a Tweet he was monitoring the situation:

‘I am aware of and closely monitoring an unfolding situation in Newark. I am in touch with local authorities and the State is providing resources as requested. We will continue to support local law enforcement and ensure that all residents are safe.’